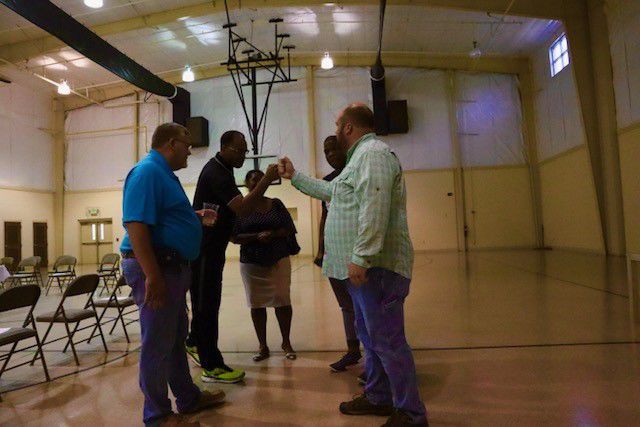 Pastors Oliver T. McCray at left and Bryant Sims, right, bump fists in greeting Thursday before an ecumenical meeting of pastors, community leaders and residents in Greenwood at the Life Center of Morris Chapel Baptist Church, where McCray is pastor. 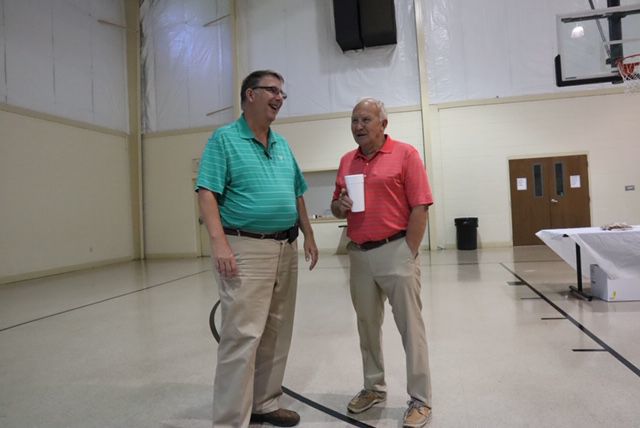 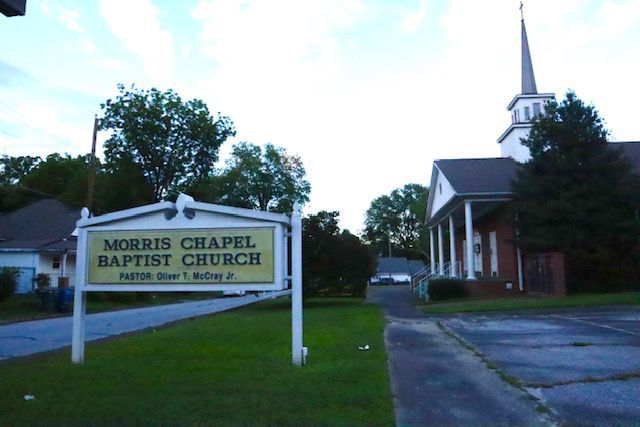 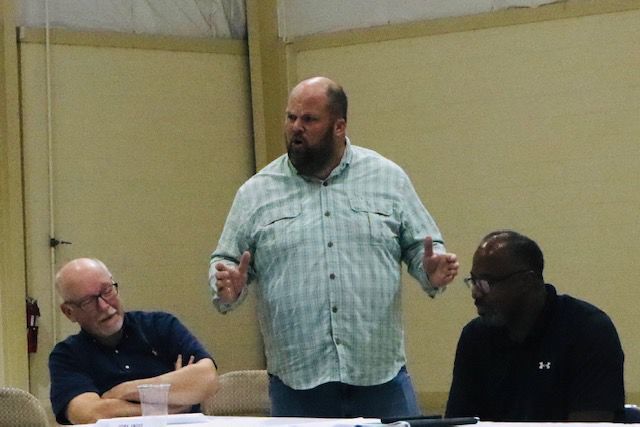 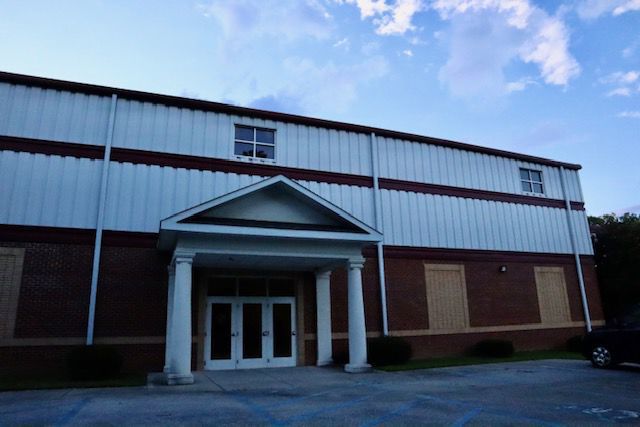 The Life Center of Morris Chapel Baptist Church in Greenwood is among locations where ecumenical groups of pastors, community leaders and residents have been gathering to discuss a formulate ways to promote racial healing and community unity.

Pastors Oliver T. McCray at left and Bryant Sims, right, bump fists in greeting Thursday before an ecumenical meeting of pastors, community leaders and residents in Greenwood at the Life Center of Morris Chapel Baptist Church, where McCray is pastor.

The Life Center of Morris Chapel Baptist Church in Greenwood is among locations where ecumenical groups of pastors, community leaders and residents have been gathering to discuss a formulate ways to promote racial healing and community unity.

An ecumenical group of pastors and residents wants to do more than talk about bringing community together. They want to take actionable steps toward it.

Sitting around a group of tables arranged in a square, those present this past Thursday talked about racism, bridge building and ways to bring peace to the community.

The group is so new it doesn’t have a name or a complete outline of its aims, but people are organizing a prayer walk and a possible park cleanup.

“I want us to be of one accord, for unity, peace and reuniting our community,” said Steve Coleman, director of Genesis Initiatives at Piedmont Technical College and head of MODELS Academy, a mentoring program for young black men. “There has been fractioning in all sorts of ways. We see it in social media, on jobs and everywhere. In my lifetime, this might be our most pivotal moment in race relations.”

Steve Riley, with Emerald Ink and Stitches and South Main Baptist Church in Greenwood, said the group will start small and grow.

After Thursday’s meeting, Coleman told the Index-Journal, “Things keep happening in our community. We want a collective effort to show unity and have a response to the negativity that’s going on. Steve Riley suggested bringing together pastors he knew and I brought together pastors I know. We’re committed to it.”

Riley said there will be hurdles and disagreements to overcome, but they want this group to keep working.

Many pastors involved are already connected through a group email where they check in weekly with each other, according to Toby Frost, pastor at South Main Baptist.

“The biggest thing is getting more people involved,” Riley said. “Everybody here has got to trust in each other.”

“Would we be gathered if George Floyd had not died? Let’s be honest. We wouldn’t be meeting,” Bishop Oliver T. McCray Jr., pastor at Morris Chapel Baptist Church, asked the group Thursday.

Thursday’s ecumenical meeting occurred one day after the five-year anniversary of the Emanuel AME church shooting in Charleston and also in the wake of the deaths of Breonna Taylor and Ahmaud Arbery, not only that of George Floyd.

“We don’t believe in any kind of destruction of property,” McCray said. “What I am about is the passion people are exemplifying by the injustice we all are experiencing. Can we all agree with that?... Black folks sick and tired of dying, innocently, by people who don’t like us because we’re black. We need someone in this community we can trust.”

McCray said he’s contemplating a show of community unity through a large-scale Greenwood prayer walk, possibly in July, and Riley said he wants to couple that with a service project, such as cleaning up the Gage Street park. More details will be made available as they are developed. For information, contact Steve Coleman, 864-941-8603 or coleman.s@ptc.edu.

Robbie Earle, lead pastor of Legacy City Church in Greenwood, said he’s involved with this ecumenical group as well as ones building relationships among churches, such as Partnership for Peace. That is a collaboration between Legacy City and The Life Center in Abbeville, led by pastor Josh Chiles, which is also focusing on racial injustice and Christian teachings. Earle is involved with a group of pastors who meet for lunch once a month.

“If we can unite under the banner of Christ, man, we can get some stuff done,” Earle said. “It’s going to take multiple groups bringing people in to the fold.”

China: US Xinjiang warning 'bad for the whole world'