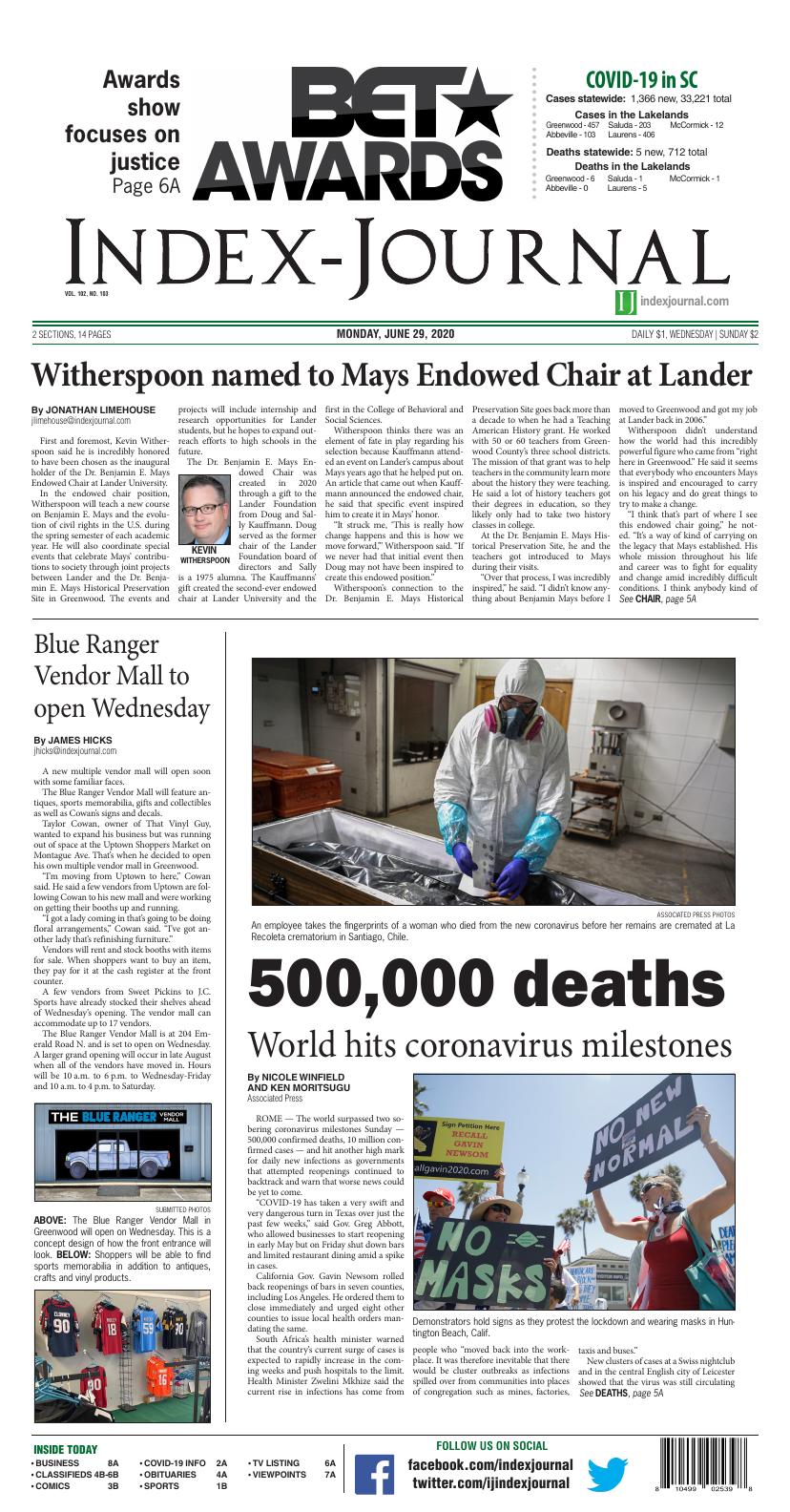 First and foremost, Kevin Witherspoon said he is incredibly honored to have been chosen as the inaugural holder of the Dr. Benjamin E. Mays Endowed Chair at Lander University.

In the endowed chair position, Witherspoon will teach a new course on Benjamin E. Mays and the evolution of civil rights in the U.S. during the spring semester of each academic year. He will also coordinate special events that celebrate Mays’ contributions to society through joint projects between Lander and the Dr. Benjamin E. Mays Historical Preservation Site in Greenwood. The events and projects will include internship and research opportunities for Lander students, but he hopes to expand outreach efforts to high schools in the future.

The Dr. Benjamin E. Mays Endowed Chair was created in 2020 through a gift to the Lander Foundation from Doug and Sally Kauffmann. Doug served as the former chair of the Lander Foundation board of directors and Sally is a 1975 alumna. The Kauffmanns’ gift created the second-ever endowed chair at Lander University and the first in the College of Behavioral and Social Sciences.

Witherspoon thinks there was an element of fate in play regarding his selection because Kauffmann attended an event on Lander’s campus about Mays years ago that he helped put on. An article that came out when Kauffmann announced the endowed chair, he said that specific event inspired him to create it in Mays’ honor.

“It struck me, ‘This is really how change happens and this is how we move forward,’” Witherspoon said. “If we never had that initial event then Doug may not have been inspired to create this endowed position.”

Witherspoon’s connection to the Dr. Benjamin E. Mays Historical Preservation Site goes back more than a decade to when he had a Teaching American History grant. He worked with 50 or 60 teachers from Greenwood County’s three school districts. The mission of that grant was to help teachers in the community learn more about the history they were teaching. He said a lot of history teachers got their degrees in education, so they likely only had to take two history classes in college.

At the Dr. Benjamin E. Mays Historical Preservation Site, he and the teachers got introduced to Mays during their visits.

“Over that process, I was incredibly inspired,” he said. “I didn’t know anything about Benjamin Mays before I moved to Greenwood and got my job at Lander back in 2006.”

Witherspoon didn’t understand how the world had this incredibly powerful figure who came from “right here in Greenwood.” He said it seems that everybody who encounters Mays is inspired and encouraged to carry on his legacy and do great things to try to make a change.

“I think that’s part of where I see this endowed chair going,” he noted. “It’s a way of kind of carrying on the legacy that Mays established. His whole mission throughout his life and career was to fight for equality and change amid incredibly difficult conditions. I think anybody kind of hearing about that and learning his story is more inspired to do whatever they can.”

Mays, who was born in 1894, grew up during the Jim Crow Era, which Witherspoon called “one of the bleakest times in racial relations in our history.”

“He was raised in a time where there wasn’t a whole lot of reason for Blacks — particularly in the South — to look around and feel like there was much hope,” he said. “Somehow he fought through that.”

Witherspoon said Mays was one of the people speaking out on racial injustices in the 1930s and 1940s, which not a span most people think of when they talk about the civil rights movement.

With the current racial climate, which in part stems from the death of George Floyd at the hands of Minnesota police officers, Witherspoon said it’s a shame that Mays could say some of the very same things that he said in the 1930s and 1940s and they would still apply today.

“There have been significant changes along the way, but there remain so many issues and problems,” he said.

From a historian’s perspective, one of the things that strike him about the current times is how front and center history has become within everything that’s going on. He acknowledged that racial climate is a part of that, but he also referenced what’s happening with the statues and monuments that are being taken down and vandalized around the U.S.

“The best thing that’s coming out of this from where I’m sitting has to be the conversations that people are having,” he said. “I think people are realizing now that these are really important conversations and people need to learn their history to understand that.”

Witherspoon thinks a lot of what Mays fought for, talked about and wrote about are still hot-button conversation topics that people are having today.

An employee takes the fingerprints of a woman who died from the new coronavirus before her remains are cremated at La Recoleta crematorium in Santiago, Chile.

Demonstrators hold signs as they protest the lockdown and wearing masks in Huntington Beach, Calif.

A lifeguard keeps watch over a packed beach in Huntington Beach, Calif.

ROME — The world surpassed two sobering coronavirus milestones Sunday — 500,000 confirmed deaths, 10 million confirmed cases — and hit another high mark for daily new infections as governments that attempted reopenings continued to backtrack and warn that worse news could be yet to come.

“COVID-19 has taken a very swift and very dangerous turn in Texas over just the past few weeks,” said Gov. Greg Abbott, who allowed businesses to start reopening in early May but on Friday shut down bars and limited restaurant dining amid a spike in cases.

California Gov. Gavin Newsom rolled back reopenings of bars in seven counties, including Los Angeles. He ordered them to close immediately and urged eight other counties to issue local health orders mandating the same.

South Africa’s health minister warned that the country’s current surge of cases is expected to rapidly increase in the coming weeks and push hospitals to the limit. Health Minister Zwelini Mkhize said the current rise in infections has come from people who “moved back into the workplace. It was therefore inevitable that there would be cluster outbreaks as infections spilled over from communities into places of congregation such as mines, factories, taxis and buses.”

New clusters of cases at a Swiss nightclub and in the central English city of Leicester showed that the virus was still circulating widely in Europe, though not with the rapidly growing infection rate seen in parts of the U.S., Latin America and India.

Poland and France, meanwhile, attempted a step toward normalcy as the held elections that had been delayed by the virus.

Wearing mandatory masks, social distancing in lines and carrying their own pens to sign voting registers, French voters cast ballots in a second round of municipal elections. Poles also wore masks and used hand sanitizer, and some in virus-hit areas were told to mail in their ballots to avoid further contagion.

“I didn’t go and vote the first time around because I am elderly and I got scared,” said Fanny Barouh as she voted in a Paris school.

In Texas, Abbott appeared with Vice President Mike Pence, who cut campaign events from upcoming visits to Florida and Arizona because of rising virus cases in those states.

Pence praised Abbott for both his decision to reopen the state, and to roll back the reopening plans.

“You flattened the curve here in Texas ... but about two weeks ago something changed,” Pence said.

Pence urged people to wear masks when unable to practice social distancing. He and Abbott wore face masks as they entered and left the room, taking them off while speaking to reporters.

Health and Human Services Secretary Alex Azar, meanwhile, defended the fact that President Donald Trump has rarely worn a mask in public, saying he doesn’t have to follow his own administration’s guidance because as a leader of the free world he’s tested regularly and is in “very different circumstances than the rest of us.”

Addressing spikes in reported coronavirus cases in some states, Azar said on NBC’s “Meet the Press” that people “have to take ownership” of their own behaviors by social distancing and wearing masks if possible.

A reported tally Sunday from Johns Hopkins University researchers said the death toll from the coronavirus pandemic had reached 500,108.

The true death toll from the virus, which first emerged in China late last year, is widely believed to be significantly higher. Experts say that especially early on, many victims died of COVID-19 without being tested for it.

The World Health Organization announced another daily record in the number of confirmed coronavirus cases across the world — topping over 189,000 in a single 24-hour period. The tally eclipses the previous record a week earlier at over 183,000 cases, showing case counts continue to progress worldwide.

Overall the U.S. still has far and away the most total cases. At more than 2,450,000 — roughly twice that of Brazil. The number of actual cases worldwide is much higher.

ABOVE: The Blue Ranger Vendor Mall in Greenwood will open on Wednesday. This is a concept design of how the front entrance will look. BELOW: Shoppers will be able to find sports memorabilia in addition to antiques, crafts and vinyl products.

Shoppers of the Blue Ranger Vendor Mall will be able to find sports memorabilia in addition to antiques, crafts and vinyl products.

A new multiple vendor mall will open soon with some familiar faces.

The Blue Ranger Vendor Mall will feature antiques, sports memorabilia, gifts and collectibles as well as Cowan’s signs and decals.

Taylor Cowan, owner of That Vinyl Guy, wanted to expand his business but was running out of space at the Uptown Shoppers Market on Montague Ave. That’s when he decided to open his own multiple vendor mall in Greenwood.

“I’m moving from Uptown to here,” Cowan said. He said a few vendors from Uptown are following Cowan to his new mall and were working on getting their booths up and running.

“I got a lady coming in that’s going to be doing floral arrangements,” Cowan said. “I’ve got another lady that’s refinishing furniture.”

Vendors will rent and stock booths with items for sale. When shoppers want to buy an item, they pay for it at the cash register at the front counter.

A few vendors from Sweet Pickins to J.C. Sports have already stocked their shelves ahead of Wednesday’s opening. The vendor mall can accommodate up to 17 vendors.

The Blue Ranger Vendor Mall is at 204 Emerald Road N. and is set to open on Wednesday. A larger grand opening will occur in late August when all of the vendors have moved in. Hours will be 10 a.m. to 6 p.m. to Wednesday-Friday and 10 a.m. to 4 p.m. to Saturday. 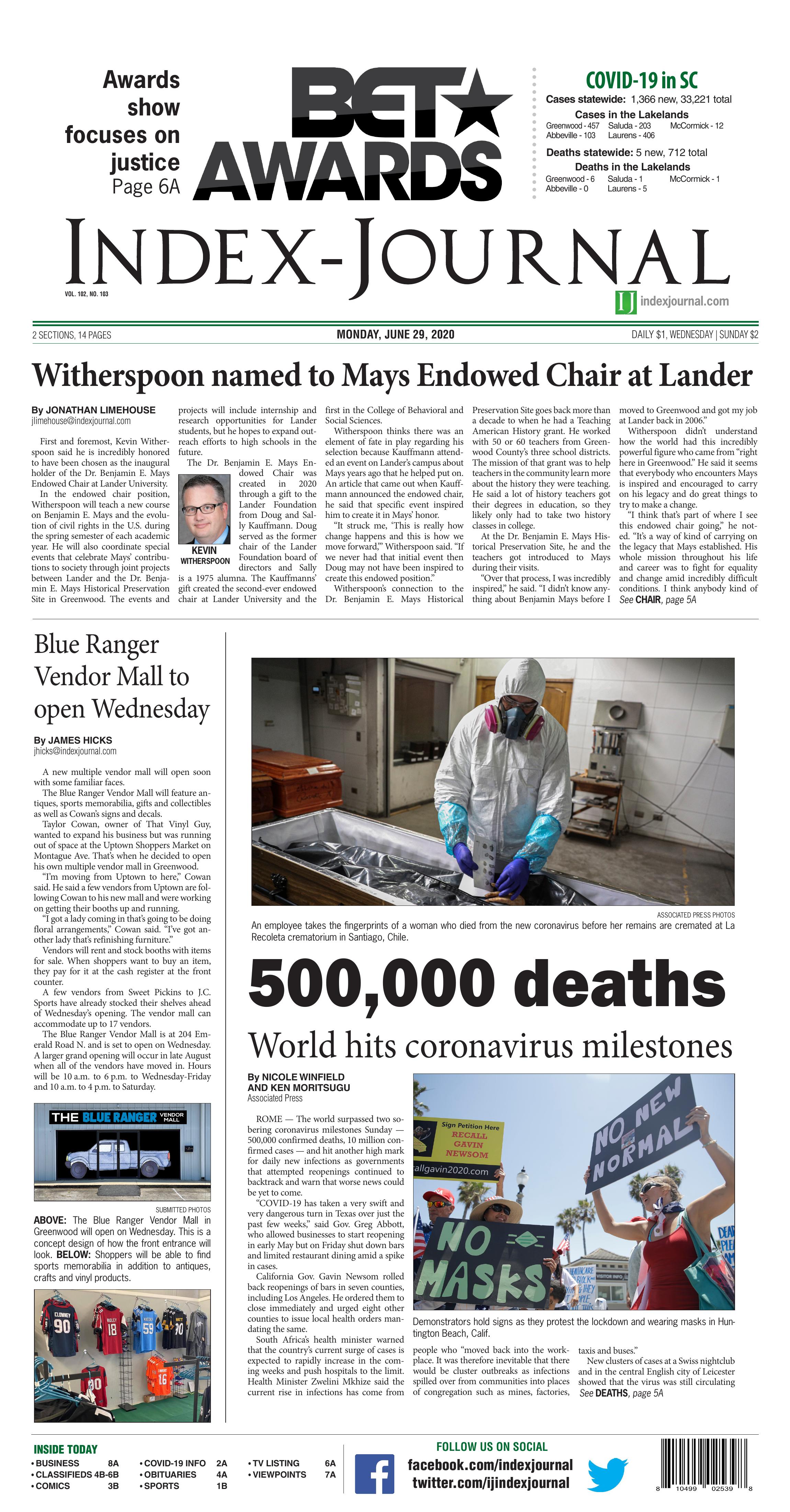