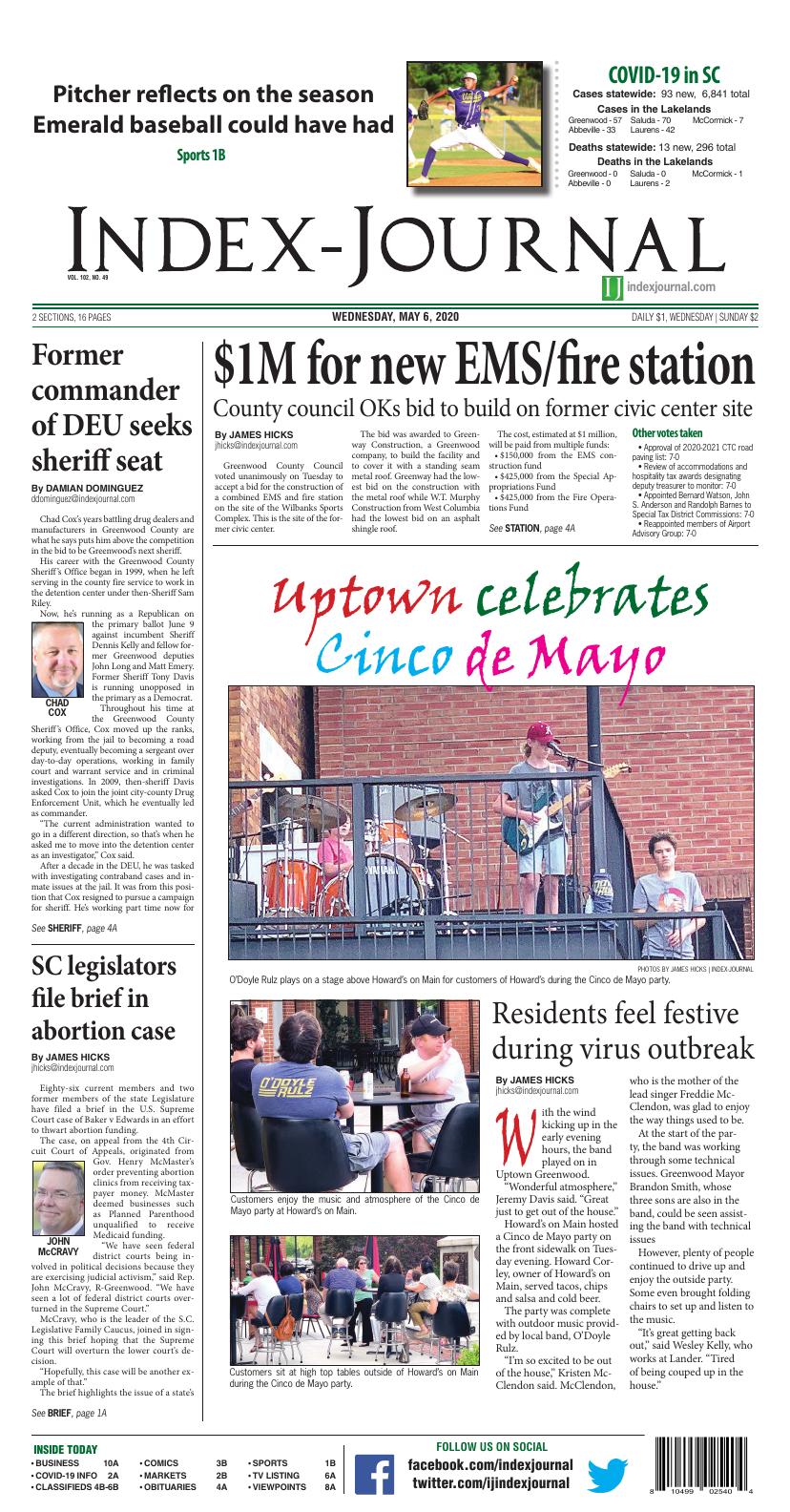 Greenwood County Council votes unanimously to accept a bid for construction of an EMS/Fire station at the Wilbanks Sports Complex.

Greenwood County Council voted unanimously on Tuesday to accept a bid for the construction of a combined EMS and fire station on the site of the Wilbanks Sports Complex. This is the site of the former civic center.

The cost, estimated at $1 million, will be paid from multiple funds:

$425,000 from the Special Appropriations Fund

Greenwood Commissioners of Public Works is expected to take up what to do about $44,000 in utility connection fees associated with the project. Chairman Steve Brown said the station will serve the city and County Council members thought Greenwood CPW.

“Maybe they will see correctly to do the right thing,” Vice Chairman Chuck Moates said.

Council also voted unanimously to provide the Town of Ware Shoals with $25,000 to finish the Ware Shoals Amphitheater stage. A one-time fund from the hospitality tax discretionary fund will cover the cost.

“Outdoor venues are going to be something that we are going to seeing a lot more of,” Councilman Mark Allison said.

Council also gave first reading to an ordinance that would amend the lease agreement between Greenwood County and Project Green Bee as well as an ordinance to allow golf cart parking and a pavilion at the Village and Cottages at Palmetto Crossing.

Councilman Robbie Templeton participated through Google Meet while all other council members attended in person.

Chad Cox’s years battling drug dealers and manufacturers in Greenwood County are what he says puts him above the competition in the bid to be Greenwood’s next sheriff.

His career with the Greenwood County Sheriff’s Office began in 1999, when he left serving in the county fire service to work in the detention center under then-Sheriff Sam Riley.

Now, he’s running as a Republican on the primary ballot June 9 against incumbent Sheriff Dennis Kelly and fellow former Greenwood deputies John Long and Matt Emery. Former Sheriff Tony Davis is running unopposed in the primary as a Democrat.

Throughout his time at the Greenwood County Sheriff’s Office, Cox moved up the ranks, working from the jail to becoming a road deputy, eventually becoming a sergeant over day-to-day operations, working in family court and warrant service and in criminal investigations. In 2009, then-sheriff Davis asked Cox to join the joint city-county Drug Enforcement Unit, which he eventually led as commander.

“The current administration wanted to go in a different direction, so that’s when he asked me to move into the detention center as an investigator,” Cox said.

After a decade in the DEU, he was tasked with investigating contraband cases and inmate issues at the jail. It was from this position that Cox resigned to pursue a campaign for sheriff. He’s working part time now for the Calhoun Falls Police Department as a lieutenant, and he described his role as a consultant helping the department with investigations.

“The most important trait for a sheriff, to me, is an unwavering desire to protect the residents and citizens of your community,” he said. “My experience in law enforcement, 20 years, has been at the sheriff’s office.”

Seeing the state of crime in Greenwood, Cox said the community is at a crossroads. He said if drugs, gangs and violence are left unchecked, there might be a point where it grows to be a bigger problem than local law enforcement can handle.

“I’m scared if it gets to a certain point, we may not be able to get control of it,” he said. “We have to refocus our priorities on our narcotics division ... Everything revolves around drugs. You’re either selling drugs or stealing to buy drugs.”

He said the move away from a dedicated, joint drug enforcement unit seems like a mistake, and that tackling the drug problem will spark a lowering of violent crimes and neighborhood gang activity. Cox said if he’s elected, he wants to build up the sheriff’s office training division with emphasis on training officers in drug investigations and how to handle gangs.

Building key relationships with other agencies, including federal and state, is important, but Cox said he wants to perform a comprehensive personnel review to make sure the employees already working for the sheriff’s office are in the roles they’re best suited for.

“Geographically speaking, we shouldn’t have the drug problems and violent crime problems we have,” he said. “This is a big-city problem.”

To combat drugs, he said he’d want to see a DEU with a minimum of five officers, up to 10 officers investigating drug crimes. He wants them to return to traditional tactics that have worked in the past: working with confidential informants, raiding residences where drugs are sold using search warrants and working closely with state and federal agents.

“It doesn’t matter who kicks the door open on a drug dealer,” he said. “It’s a team effort.”

The 47-year-old Cox lives in Hodges with his wife Teresa, and they have two children, 25-year-old Nick and 27-year-old Tyler. They are members of Hodges Presbyterian Church.

What’s been done to fight crime, Cox said, isn’t working. His experience with drug investigations is what he said makes him the most suitable pick for Greenwood’s next sheriff, and he encouraged anyone with ideas or thoughts about how to keep Greenwood safe to call or text him any time on his cellphone: 864-323-4345. He said he has no plans to change his number if elected.

“I believe I have the heart and passion for it,” he said, “because we’ve got to get our community back.”

Eighty-six current members and two former members of the state Legislature have filed a brief in the U.S. Supreme Court case of Baker v Edwards in an effort to thwart abortion funding.

McCravy, who is the leader of the S.C. Legislative Family Caucus, joined in signing this brief hoping that the Supreme Court will overturn the lower court’s decision.

“Hopefully, this case will be another example of that.”

The brief highlights the issue of a state’s right to determine which medical providers are deemed qualified and can receive reimbursement from Medicaid.

It argues that South Carolina has strong public policy interest in promoting life and ensuring that taxpayer dollars are not spent to fund abortions.

“We need the executive and legislative to operate without improper interference from the judicial branch,” McCravy said.

The patio outside of Howard’s on Main begins to fill up for the Cinco de Mayo party.

Customers enjoy the outdoor seating at Howard’s on Main during the Cinco de Mayo party.

O’Doyle Rulz plays on a stage above Howard’s on Main for customers of Howard’s during the Cinco de Mayo party.

Customers enjoy the music and atmosphere of the Cinco de Mayo party at Howard’s on Main.

Customers sit at high top tables outside of Howard’s on Main during the Cinco de Mayo party.

With the wind kicking up in the early evening hours, the band played on in Uptown Greenwood.

“Wonderful atmosphere,” Jeremy Davis said. “Great just to get out of the house.”

The party was complete with outdoor music provided by local band, O’Doyle Rulz.

“I’m so excited to be out of the house,” Kristen McClendon said. McClendon, who is the mother of the lead singer Freddie McClendon, was glad to enjoy the way things used to be.

However, plenty of people continued to drive up and enjoy the outside party. Some even brought folding chairs to set up and listen to the music.

“It’s great getting back out,” said Wesley Kelly, who works at Lander. “Tired of being cooped up in the house.” 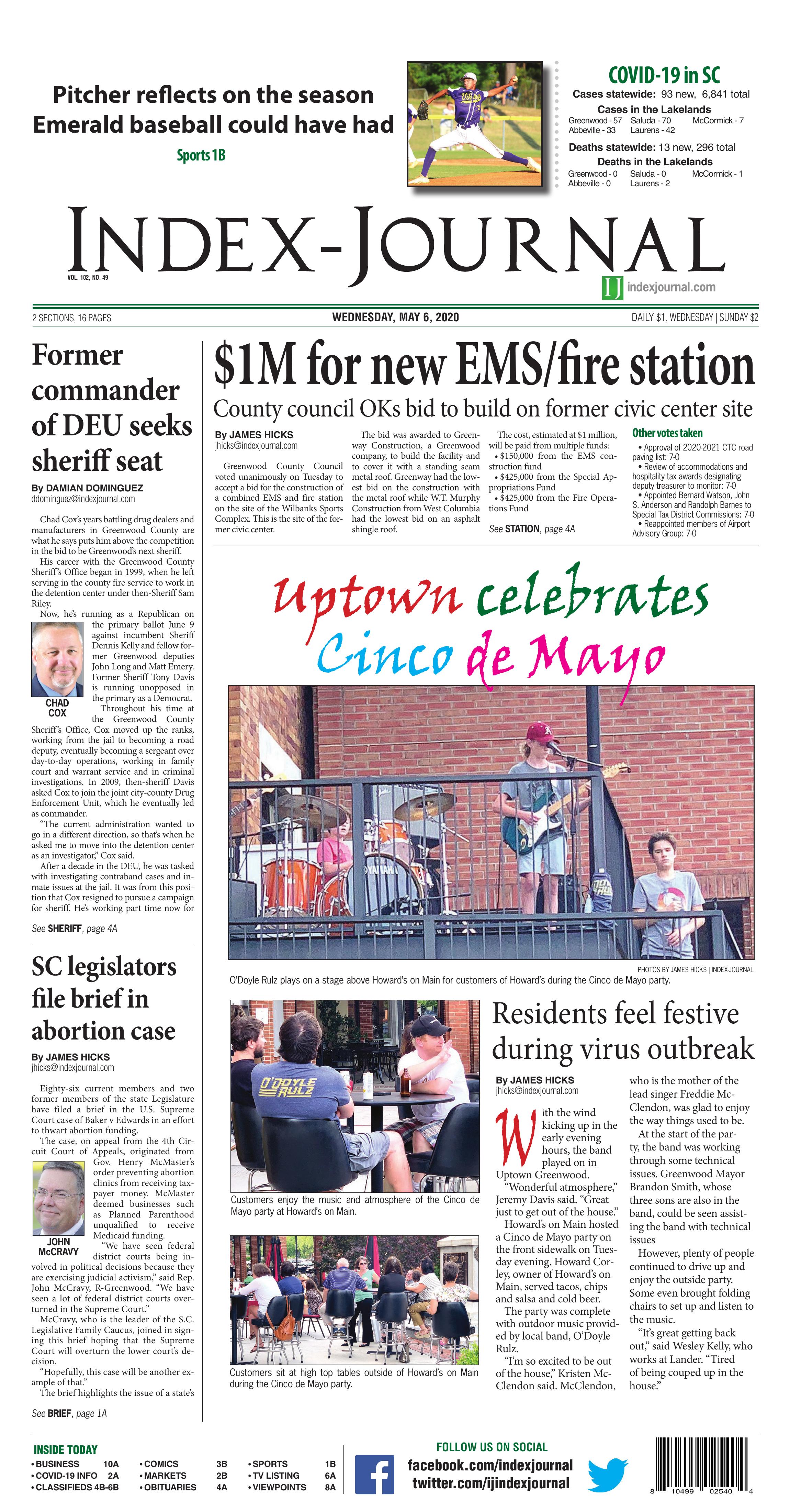