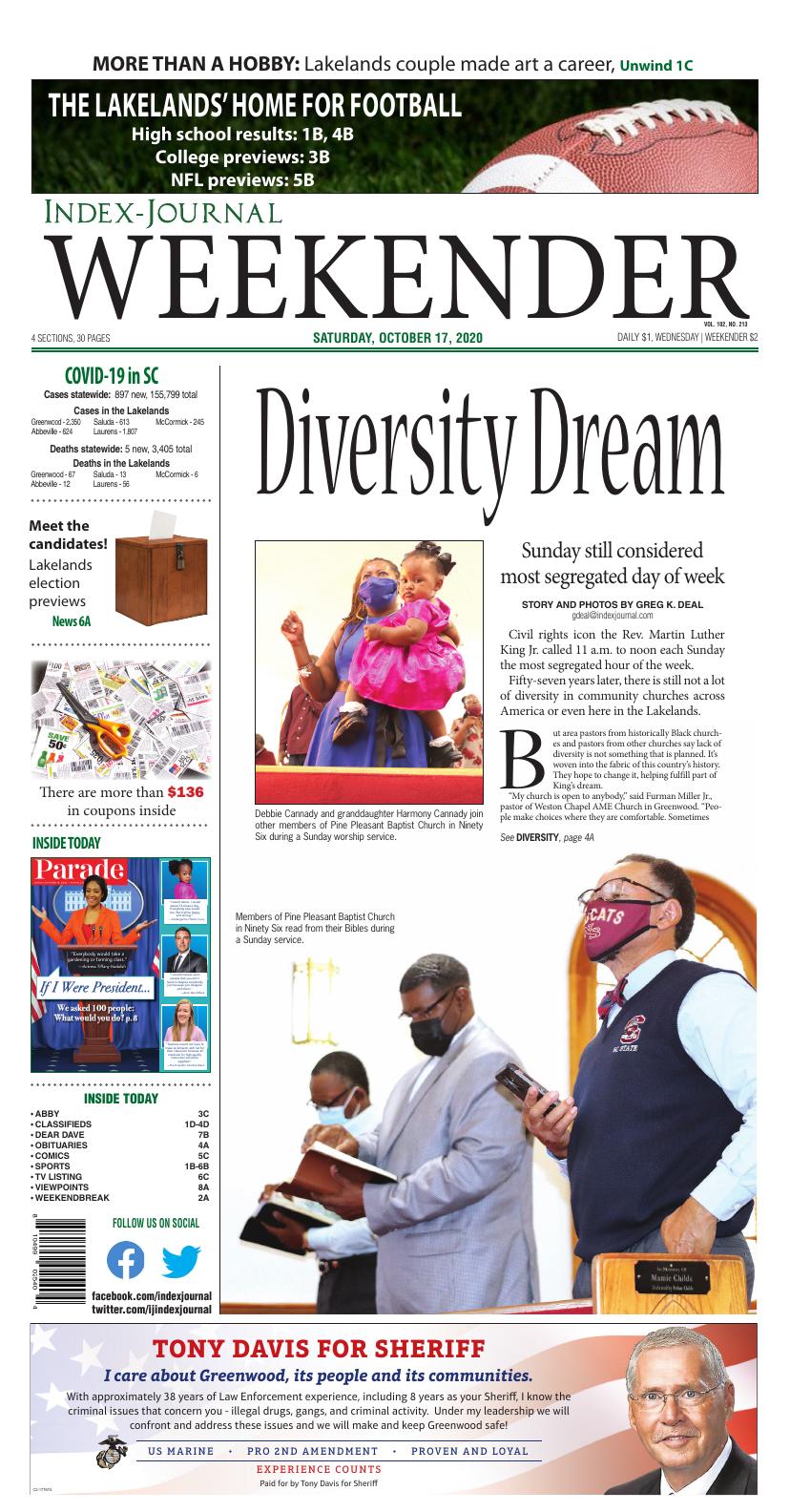 Members of Pine Pleasant Baptist Church in Ninety Six read from their Bibles during a Sunday service.

Church members gather in the parking lot for a drive-thru church service Sunday at The Life Center in Abbeville.

Civil rights icon the Rev. Martin Luther King Jr. called 11 a.m. to noon each Sunday the most segregated hour of the week.

Fifty-seven years later, there is still not a lot of diversity in community churches across America or even here in the Lakelands.

But area pastors from historically Black churches and pastors from other churches say lack of diversity is not something that is planned. It’s woven into the fabric of this country’s history. They hope to change it, helping fulfill part of King’s dream.

“My church is open to anybody,” said Furman Miller Jr., pastor of Weston Chapel AME Church in Greenwood. “People make choices where they are comfortable. Sometimes you don’t visit another church. A lot of people have never experienced an AME church. All churches are very family oriented. We serve one God. I think that, unfortunately, the history of the country is that we’ve made it where we have Black and white churches.”

Miller pointed to a recent unity march and rally in Greenwood, led by Black and white ministers in the wake of George Floyd’s death at the hands of police in Minneapolis, as a sign that people are coming together.

“If we’re doing our job as pastors, we’re leading people to Christ,” Miller said. “Some of the things that separate us will eventually go away. There are challenges in Greenwood, but people in the clergy community are working to tear down divisions.”

Michael Meyers, pastor of Pleasant Rock Baptist Church in Ninety Six, said the problem is that people have no diversity during the week, so it’s no surprise there’s a lack of it in churches on Sunday mornings.

“At the same time, the worship experience should be comfortable for anyone attending; however, it’s hard to be comfortable when you are the only person of a different color walking into a congregation with dozens of stares,” Meyers said. “The historical Black church is still so important in these times, especially when issues hit our communities that don’t affect other communities.”

While he said his church is open to everyone, there are some instances when having a historically Black church provides opportunities that might not be available in a more diverse setting.

“It may be hard for some Black pastors to discuss racially sensitive issues when there are white faces staring at them,” Meyers said. “I don’t believe it should be. Wrong is wrong, and evil doesn’t have a color.”

Miller echoed Meyers’ sentiment about the lack of diversity that he said starts during day-to-day life. He said racism is a sin.

“Let’s work those things out that separate us that aren’t emanating from the church,” Miller said. “I preach love and unity.”

Miller urges all people to visit the national AME website (ame-church.com) and read about the history of the African American Episcopal Church.

Josh Chiles is the senior pastor at The Life Center in Abbeville. He has made it part of his mission to bring diverse groups of people together for worship.

“I can tell you that my church, from its inception, has been working tirelessly at changing that,” Chiles said about the lack of diversity. “The need for diversity is evident as well as biblical. All the answers we need are in the Bible, and, when read with the right lens, it gives us a compelling vision for diversity in the kingdom of God.

Chiles said there are four reasons he teaches diversity. The first is that we are all created in the image of God.

“A diverse church allows the opportunity for the masses to be able to see the image of God in different shades, sizes and structures,” Chiles said.

The second is the Gospel.

“The Gospel of Jesus makes it possible for anyone who believes to have eternal life,” Chiles said. “He made the way for all people to be saved.”

The third is God’s family.

“We must begin to view our church members as God’s people and not our people,” Chiles said. “We must view them as members of God’s family first. When we do this, our prejudices begin to crumble. Understanding the family of God is a weapon against racial intolerance inside the four walls of church and elsewhere.”

Finally, Chiles points to life beyond this one.

“We won’t fight against racism or wonder how to build diversity,” he said of the afterlife. “We will be diverse. We will love completely and fully. We will worship together and enjoy one another for all eternity.”

Mary Balfour Dunlap, rector at The Church of the Resurrection, said the importance and vitality of the Black community and Black churches in our area cannot be expressed enough.

“I am so thankful and grateful for the Black pastors in our community who continue to share God’s love,” she said. “The Black community has been hurt for centuries in our country. It is my prayer and hope that we, as a church, can reconcile our wrongs and invite our Black sisters and brothers to feel God’s love in a positive and affirming way.”

Dunlap said she has a “deep desire” for the Church of the Resurrection to be more diverse.

“But I know that takes work, radical hospitality and sharing the love of Christ,” she said. “All people of every kind are welcome to worship at The Church of the Resurrection. You will be received with love.”

Chris Leonard, pastor at Rock Presbyterian Church of Greenwood, said it is important to understand that the universal church of Jesus Christ is not segregated, but an amalgam of all ethnicities from around the world.

“The unity that binds us together as the church is not when and how we worship, but ultimately in faith in Jesus Christ,” Leonard said. “One reason for the separation we see on Sunday mornings is likely a result of an unfortunate and ugly time when our country was segregated in so many aspects of life through Jim Crow laws.

“A second reason is likely something less offensive and distasteful and has simply to do with choice. We are all free to worship when, where, with and how we feel led. With this freedom, many choose to worship where they have family and friends, where the traditions and worship style feel right to them, and, ultimately, where they are led by the Holy Spirit to grow in their knowledge of God and their service to Jesus Christ.”

Leonard said historically Black churches have been a driving force in helping advance the cause of civil rights and are “certainly to be celebrated for living out their faith in such a powerful and courageous way in the face of many trials, persecution and even loss of life.”

“I believe, as followers of Jesus, we are trying to emulate the same type of community that was true of the people that he called to follow him when he was on Earth,” Alley said. “His followers were different races, ages, sexes, socioeconomic classes, backgrounds and political views. The sad reality is that we have allowed social influences to influence what church is supposed to be, and I believe that the evil one has capitalized on a sinful society in order to infiltrate and segregate the church.”

Jeff Lethco, pastor of North Side Baptist Church in Greenwood, said the reason there are predominantly Black churches, especially in the South, is because when Black Christians in the South, immediately following the Civil War, needed their white brothers to stand with them, they were not received or looked upon as equals.

“That is more than just my opinion,” Lethco said. “That is a historical fact. Racism is a sin and undermines the reality that God has created all men in his image and has reconciled into one body those who are in Christ.”

Willie Cannady, pastor of Pine Pleasant Baptist Church in Ninety Six, said the importance of historically Black churches is that Black people have a chance to worship the way they want to compared to the time of slavery.

“We were not being ordered by slave masters or being taught some kind of perspective that really was not suitable to our needs,” Cannady said. “The historical Black church comes from there. You can not take it away. It is what brought us to where we are now.

“In those days, when the church first started, we did not read, and there were very few Bibles, but we knew that some of the things we were being told were not the truth. It was just to keep us in bondage. So, the historically Black church was important then, and it’s still relevant today.”

That said, Cannady preaches a message of compassionate conservatism from the pulpit.

At a recent Sunday worship service, he told how God put people in places of power, and said the selection of the next U.S. Supreme Court nominee is a chance to protect the sanctity of life.

Times have changed for the church, Cannady said.

“We’re living in a time where it’s not black or white,” he said. “The picture is bigger. Even in 2020, when we stand in this season of judgment, the church is being judged. God is neither Black nor white. The kingdom of God is the health of the world. God is getting ready to move the divides out of the way so that the church can come together because, somewhere along the line, we lost our way.”

Cannady said he wants to see more unity and diversity in the church.

“Unity is a necessity,” he said. “The divide has not come because God created it, but because men created it. Until we start unifying in some areas our lives, we’re not going to do any better.” 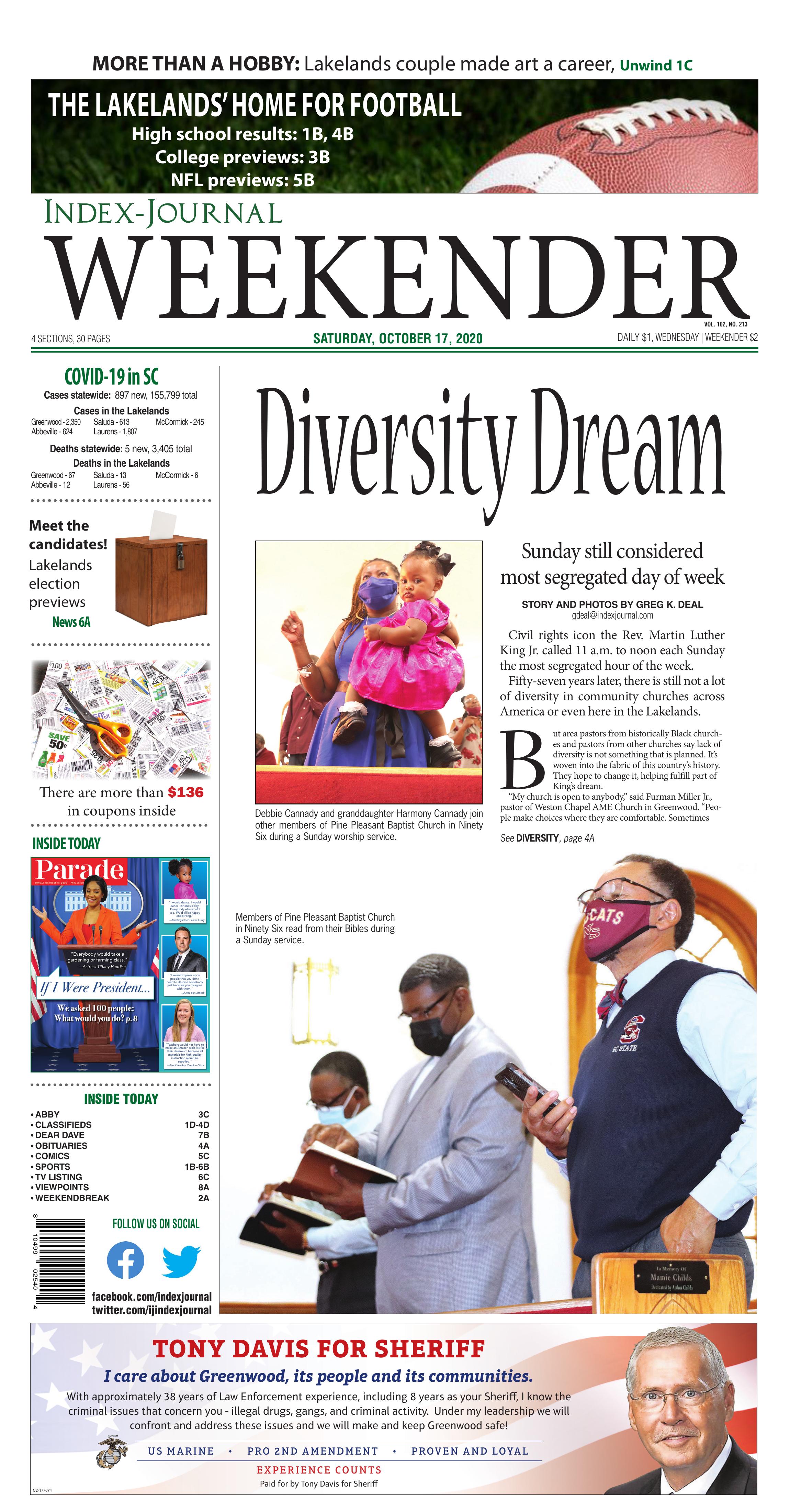