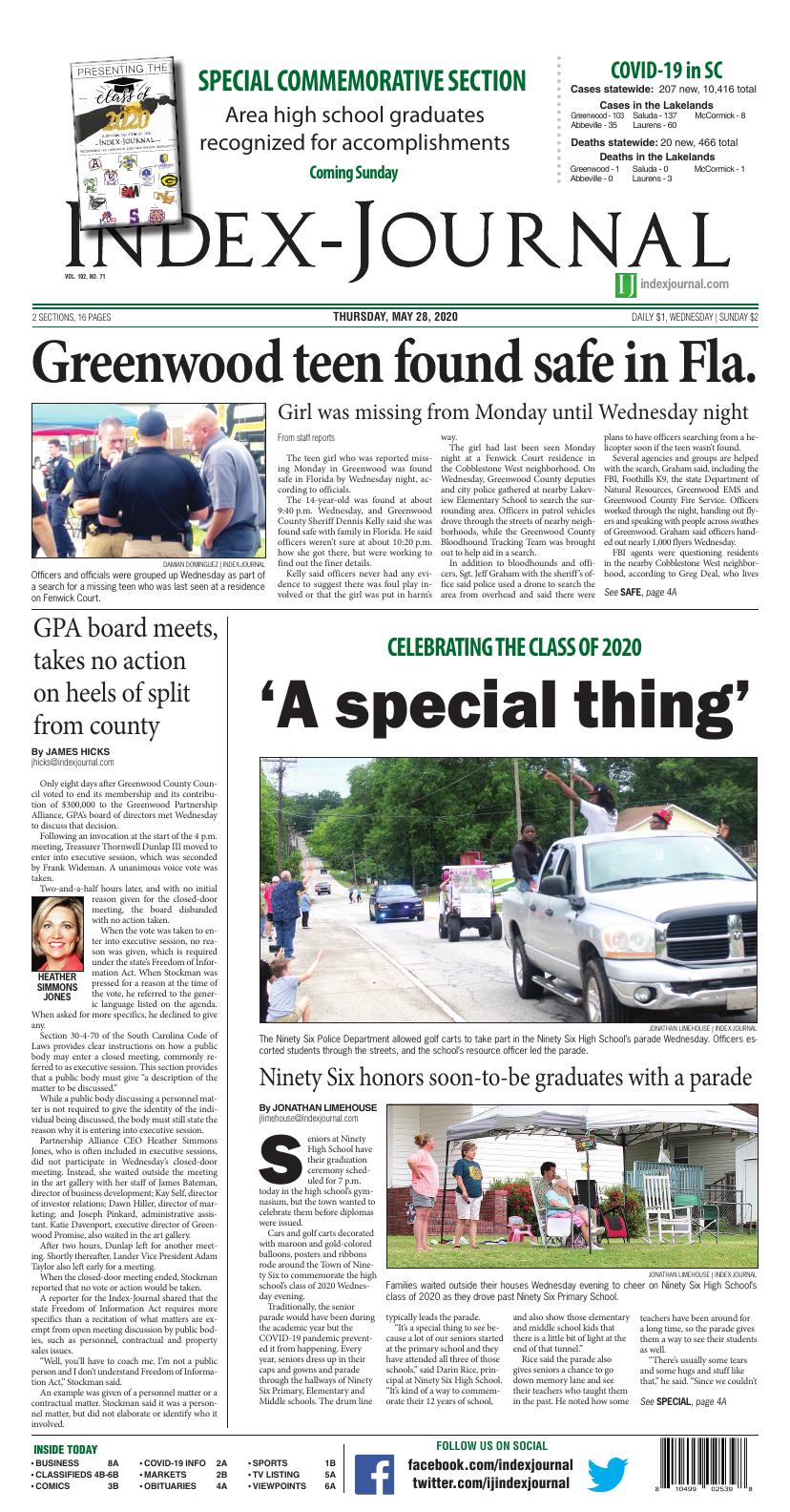 The Greenwood County Sheriff's Office Mobile Command Center, along with patrol vehicles from the sheriff's office and police department, were parked Wednesday outside Lakeview Elementary School as officers searched the area for a missing teen.

Officers and officials were grouped up Wednesday as part of a search for a missing teen who was last seen at a residence on Fenwick Court.

The Greenwood County Bloodhound Tracking Team assisted in searching Wednesday for a missing teen who was last seen Monday night at a residence near Lakeview Elementary School.

The teen girl who was reported missing Monday in Greenwood was found safe in Florida by Wednesday night, according to officials

The 14-year-old was found at about 9:40 p.m. Wednesday, and Greenwood County Sheriff Dennis Kelly said she was found safe with family in Florida. He said officers weren't sure at about 10:20 p.m. how she got there, but were working to find out the finer details.

Kelly said officers never had any evidence to suggest there was foul play involved or that the girl was put in harm's way.

The girl had last been seen Monday night at a Fenwick Court residence in the Cobblestone West neighborhood. On Wednesday, Greenwood County deputies and city police gathered at nearby Lakeview Elementary School to search the surrounding area. Officers in patrol vehicles drove through the streets of nearby neighborhoods, while the Greenwood County Bloodhound Tracking Team was brought out to help aid in a search.

In addition to bloodhounds and officers, Sgt. Jeff Graham with the sheriff's office said police used a drone to search the area from overhead and said there were plans to have officers searching from a helicopter soon if the teen wasn't found.

Several agencies and groups are helped with the search, Graham said, including the FBI, Foothills K9, the state Department of Natural Resources, Greenwood EMS and Greenwood County Fire Service. Officers worked through the night, handing out flyers and speaking with people across swathes of Greenwood. Graham said officers handed out nearly 1,000 flyers Wednesday.

FBI agents were questioning residents in the nearby Cobblestone West neighborhood, according to Greg Deal, who lives in the area. Deal is an employee of the Index-Journal.

At about 3:30 p.m., Deal said he got a knock on his door and a Greenwood County deputy and FBI agent asked to speak with him. The agent was carrying a number of forms, and spent about half an hour talking to Deal, getting his personal information and asking him questions about how he spent his Monday — the day the girl was last seen.

“He wanted to know if I knew her, and if I ever conversed with her,” Deal said.

Deal told the officers he didn’t know her. He was asked if he’d be willing to give a DNA sample, and while he agreed, no sample was taken. Deal said the agent asked that question of others in the neighborhood as well.

The officers asked Deal if he had a security camera, and asked him and his family if they had experienced any strange sights or sounds recently. They asked to search his house and crawl space, and Deal said after giving them permission, they thoroughly searched under his house.

Deal described the experience as unnerving. The officers also questioned his wife and teen son, and he noticed deputies searching nearby woods with the help of the bloodhounds. Officers showed Deal a picture of the teen, which he said he had already seen on social media.

News
top story
‘A special thing’: The Town of Ninety Six honors NHS’s class of 2020 with a parade
By JONATHAN LIMEHOUSE jlimehouse@indexjournal.com

Seniors at Ninety Six High School were celebrated a day before their graduation, as they drove through the town and received cheers from friends, family and supporters Wednesday evening.

Families waited outside their houses Wednesday evening to cheer on Ninety Six High School’s class of 2020 as they drove past Ninety Six Primary School.

Seniors at Ninety High School have their graduation ceremony scheduled for 7 p.m. today in the high school’s gymnasium, but the town wanted to celebrate them before diplomas were issued.

Cars and golf carts decorated with maroon and gold-colored balloons, posters and ribbons rode around the Town of Ninety Six to commemorate the high school’s class of 2020 Wednesday evening.

Traditionally, the senior parade would have been during the academic year but the COVID-19 pandemic prevented it from happening. Every year, seniors dress up in their caps and gowns and parade through the hallways of Ninety Six Primary, Elementary and Middle schools. The drum line typically leads the parade.

“It’s a special thing to see because a lot of our seniors started at the primary school and they have attended all three of those schools,” said Darin Rice, principal at Ninety Six High School. “It’s kind of a way to commemorate their 12 years of school, and also show those elementary and middle school kids that there is a little bit of light at the end of that tunnel.”

Rice said the parade also gives seniors a chance to go down memory lane and see their teachers who taught them in the past. He noted how some teachers have been around for a long time, so the parade gives them a way to see their students as well.

“There’s usually some tears and some hugs and stuff like that,” he said. “Since we couldn’t do that this year, we wanted to figure out some way to celebrate our seniors and give the town a chance to celebrate and recognize them as well.”

When some of the seniors approached Rice about a possible parade through the town, he jumped at the idea, but only if it could be done the right way. He wanted to assure that everyone would follow the Centers for Disease Control and Prevention’s social distancing guidelines, and the Ninety Six Police Department’s guidelines. Cars and golf carts were permissible, but the police did not want people riding in four-wheeler ATVs.

“We just wanted to be able to do something special for them,” Rice said.

Cars met in the old Ninety Six High School parking lot. Vehicles drove past Ninety Six Primary School, turned onto 246 South, went back down to Johnston Road and then came back by Ninety Six Elementary School. They essentially began and ended at the old high school, Rice explained.

Rice said it’s been a tough second half of the school year with the whole COVID-19 guidelines and shutting down of school.

“I know I’ve worked probably as hard, or harder, and I know my teachers have as well,” he said. “We’re doing everything we can do for our students even though we have to do social distancing and eLearning,” he said.

This is Rice’s third year as principal, and every year, it becomes more and more difficult to see his kids go because he’s known most of them since he started. While it’s hard to see them leave, he is glad they are graduating because they’re taking that next step, going off to do bigger and better things. He does want them to remember where they came from, which is why Rice and his faculty have tried to do as many special things for the graduates as they possibly can.

Only eight days after Greenwood County Council voted to end its membership and its contribution of $300,000 to the Greenwood Partnership Alliance, GPA’s board of directors met Wednesday to discuss that decision.

Following an invocation at the start of the 4 p.m. meeting, Treasurer Thornwell Dunlap III moved to enter into executive session, which was seconded by Frank Wideman. A unanimous voice vote was taken.

Two-and-a-half hours later, and with no initial reason given for the closed-door meeting, the board disbanded with no action taken.

When the vote was taken to enter into executive session, no reason was given, which is required under the state’s Freedom of Information Act. When Stockman was pressed for a reason at the time of the vote, he referred to the generic language listed on the agenda. When asked for more specifics, he declined to give any.

Section 30-4-70 of the South Carolina Code of Laws provides clear instructions on how a public body may enter a closed meeting, commonly referred to as executive session. This section provides that a public body must give “a description of the matter to be discussed.”

While a public body discussing a personnel matter is not required to give the identity of the individual being discussed, the body must still state the reason why it is entering into executive session.

Partnership Alliance CEO Heather Simmons Jones, who is often included in executive sessions, did not participate in Wednesday’s closed-door meeting. Instead, she waited outside the meeting in the art gallery with her staff of James Bateman, director of business development; Kay Self, director of investor relations; Dawn Hiller, director of marketing; and Joseph Pinkard, administrative assistant. Katie Davenport, executive director of Greenwood Promise, also waited in the art gallery.

When the closed-door meeting ended, Stockman reported that no vote or action would be taken.

A reporter for the Index-Journal shared that the state Freedom of Information Act requires more specifics than a recitation of what matters are exempt from open meeting discussion by public bodies, such as personnel, contractual and property sales issues.

“Well, you’ll have to coach me. I’m not a public person and I don’t understand Freedom of Information Act,” Stockman said. 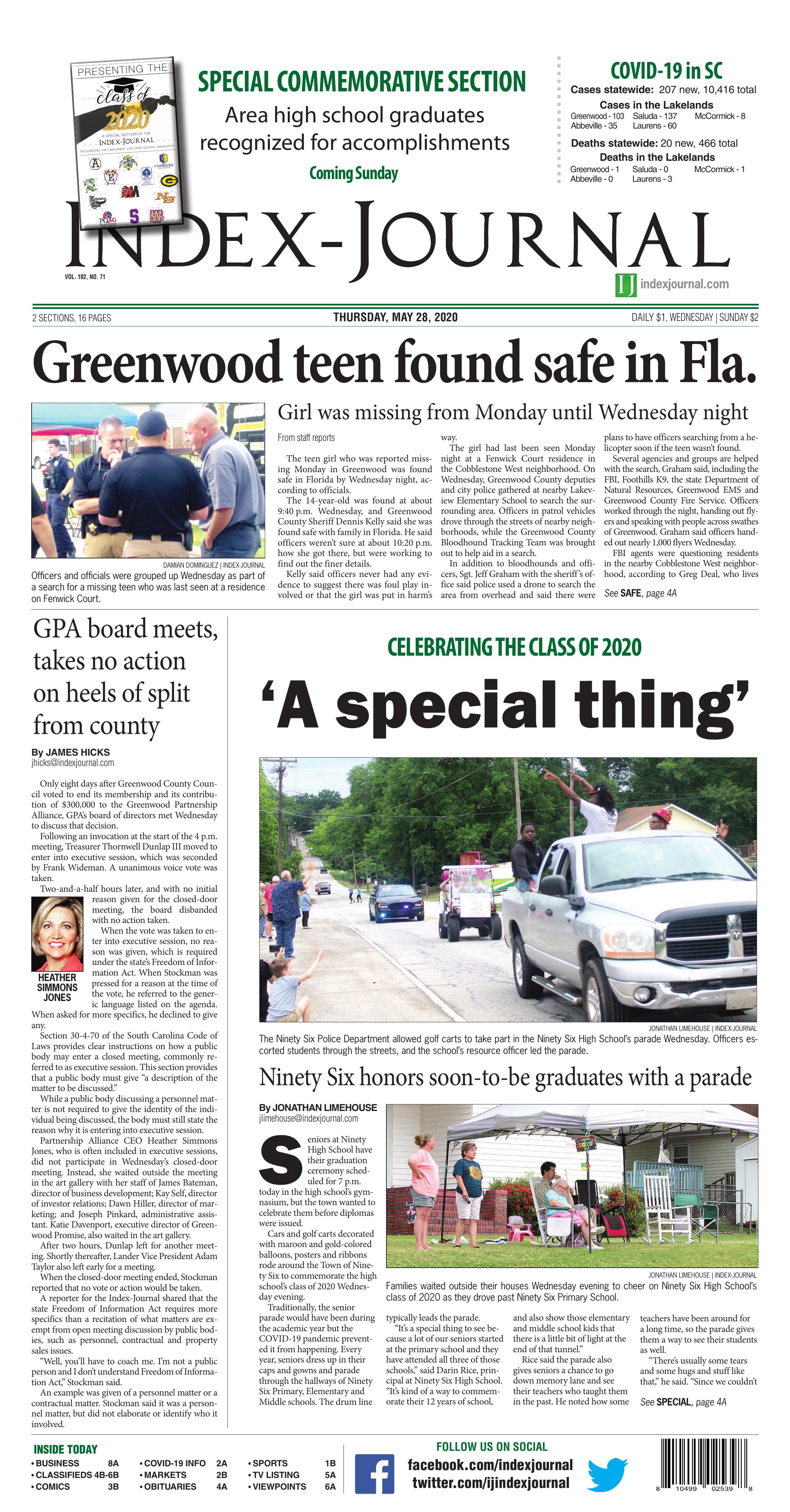