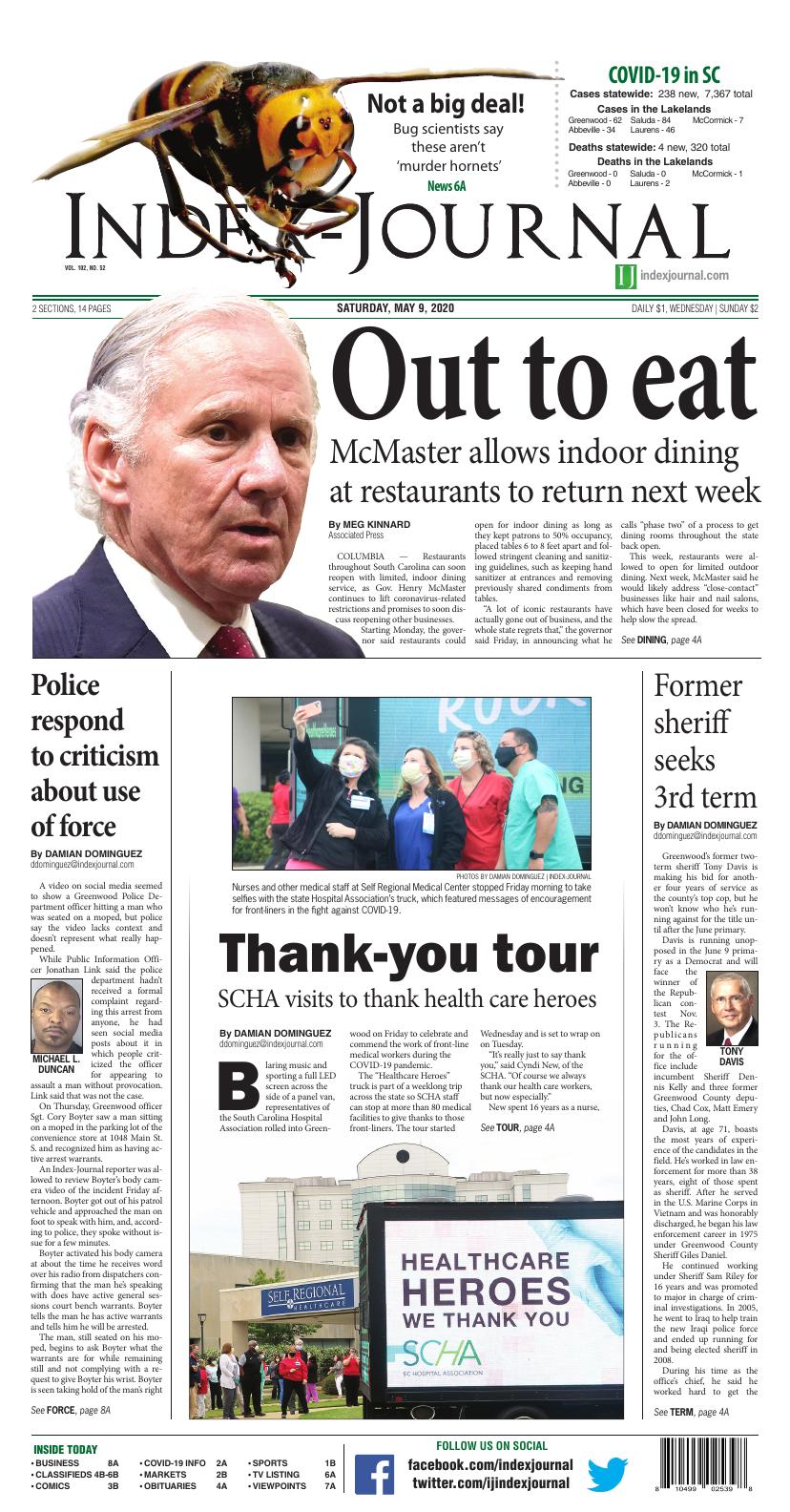 Nurses and other medical staff at Self Regional Medical Center stopped Friday morning to take selfies with the state Hospital Association’s truck, which featured messages of encouragement for front-liners in the fight against COVID-19.

In a campaign to visit more than 80 medical facilities across the state, staff at the state Hospital Association stopped at Self Regional Medical Center on Friday morning to salute the front-liners in the fight against COVID-19.

Cellphones caught pictures and video of the South Carolina Hospital Association's visit Friday to Self, where they congratulated the medical staff fighting the coronavirus.

In celebration of healthcare workers, the South Carolina Hospital Association has staff driving across the state to commend staff at medical facilities everywhere.

Blaring music and sporting a full LED screen across the side of a panel van, representatives of the South Carolina Hospital Association rolled into Greenwood on Friday to celebrate and commend the work of front-line medical workers during the COVID-19 pandemic.

The “Healthcare Heroes” truck is part of a weeklong trip across the state so SCHA staff can stop at more than 80 medical facilities to give thanks to those front-liners. The tour started Wednesday and is set to wrap on on Tuesday.

“It’s really just to say thank you,” said Cyndi New, of the SCHA. “Of course we always thank our health care workers, but now especially.”

New spent 16 years as a nurse, much of it at Self Regional, so she said returning to the hospital Friday morning was an emotional trip.

“Having been on the front lines and now being on this side, I really can’t thank them all enough,” she said.

Nurses, doctors, administrators and staff from across the spectrum at Self came out — wearing masks and for the most part standing at least six feet apart — to receive the warm welcome. Some took selfies with the truck’s lit-up LED screen in the background, displaying messages of gratitude and encouragement.

“I view these team members as heroes, and they are doing a tremendous job,” said Jim Pfeiffer, Self president and CEO. “I’m so grateful for all they do for our patients, and I think that SCHA bringing the Healthcare Heroes Truck here today to recognize their efforts was a fitting tribute.”

Greenwood’s former two-term sheriff Tony Davis is making his bid for another four years of service as the county’s top cop, but he won’t know who he’s running against for the title until after the June primary.

Davis is running unopposed in the June 9 primary as a Democrat and will face the winner of the Republican contest Nov. 3. The Republicans running for the office include incumbent Sheriff Dennis Kelly and three former Greenwood County deputies, Chad Cox, Matt Emery and John Long.

Davis, at age 71, boasts the most years of experience of the candidates in the field. He’s worked in law enforcement for more than 38 years, eight of those spent as sheriff. After he served in the U.S. Marine Corps in Vietnam and was honorably discharged, he began his law enforcement career in 1975 under Greenwood County Sheriff Giles Daniel.

He continued working under Sheriff Sam Riley for 16 years and was promoted to major in charge of criminal investigations. In 2005, he went to Iraq to help train the new Iraqi police force and ended up running for and being elected sheriff in 2008.

During his time as the office’s chief, he said he worked hard to get the agency nationally accredited and working alongside the police department to form joint units to investigate violent crimes, provide SWAT services and investigate drug activity.

During his administration, he also had to navigate through challenging internal issues, including when his former administrative assistant Sandi Owens was charged, and later pleaded guilty to, embezzling public funds from the office, or when two drug enforcement unit officers were charged with misconduct in office and embezzlement. Of the Owens case, Davis said as soon as he was made aware of any discrepancies, he immediately addressed them and got the State Law Enforcement Division involved to investigate it. Beyond that comment, he said he didn’t want to dwell on matters from years ago.

When he ran for reelection for a third term in 2016, he was beaten in the primary. Now, he said he’s ready to run again in an effort to course-correct what he sees as missteps in the county’s law enforcement efforts.

Part of the problem, Davis said, is in recruitment and retention. He said officers work hard jobs and long hours for a paycheck that some of them choose to supplement with second jobs. Retaining employees is key, he said, because it costs a lot to train and develop skilled officers; he doesn’t want to see them leave for better pay elsewhere.

“There’s a lack of respect for law enforcement officers nowadays, and I don’t know really what’s brought that on,” he said. “I think you’ve got to get out in the community and build a rapport. Many people in this community don’t even know who their officers are or who’s patrolling in their areas.”

The solution, he said, is looking at areas that have high call volumes and assigning officers not just to drive around patrolling those zones, but get out of their cars and interact with people. He said officers should be parking their cars visibly in these areas when they have to stop to write a report, so their presence is obvious and known.

Drugs, for Davis, are the root cause of violent crime and property crime alike. He said it’s essential to take a strong stance against drug activity and to arrest those who would sell and traffic in them.

“You take robberies, people are robbing to support a drug addiction most of the time,” he said. “Look at your shootings and your cuttings, a lot of them are to protect territory.”

Greenwood has been fortunate over the years to have good law enforcement officers who are dedicated to the job, Davis said. It’s essential that they’re put in the right positions, where they can do the most good with their skills.

Nowadays, Davis lives in Augusta Fields and has two adult children, Jay and Mark. He’s a member of North Side Baptist Church.

“I know the authority vested in law enforcement must be accompanied by responsibility,” Davis said. “I pledge to you as your sheriff, I will ensure that laws are enforced fairly and appropriately, without fear or favor, malice or ill will. Together, we can make our county a safer place to live, work, learn, play and raise our families.”

Crime
Greenwood police respond to criticism about officer's use of force
By DAMIAN DOMINGUEZ ddominguez@indexjournal.com

A video on social media seemed to show a Greenwood Police Department officer hitting a man who was seated on a moped, but police say the video lacks context and doesn’t represent what really happened.

While Public Information Officer Jonathan Link said the police department hadn’t received a formal complaint regarding this arrest from anyone, he had seen social media posts about it in which people criticized the officer for appearing to assault a man without provocation. Link said that was not the case.

On Thursday, Greenwood officer Sgt. Cory Boyter saw a man sitting on a moped in the parking lot of the convenience store at 1048 Main St. S. and recognized him as having active arrest warrants.

An Index-Journal reporter was allowed to review Boyter’s body camera video of the incident Friday afternoon. Boyter got out of his patrol vehicle and approached the man on foot to speak with him, and, according to police, they spoke without issue for a few minutes.

Boyter activated his body camera at about the time he receives word over his radio from dispatchers confirming that the man he’s speaking with does have active general sessions court bench warrants. Boyter tells the man he has active warrants and tells him he will be arrested.

The man, still seated on his moped, begins to ask Boyter what the warrants are for while remaining still and not complying with a request to give Boyter his wrist. Boyter is seen taking hold of the man’s right wrist and asking for the man’s other arm, but the man remains seated on the moped and doesn’t give his arm over while continuing to ask what the warrants are for.

Jonathan Link, the police department’s public information officer, said police have no obligation to read a warrant to someone at the time of arrest. Typically, he said, Greenwood’s officers read the warrant once the suspect has been taken to the county jail and is awaiting booking.

“In other words, we’re not expected to read a warrant at the side of the road,” Link said.

The officer’s tone becomes increasingly stern, and he makes clear to the man that he will have to pull him off the moped if he does not comply in order to put him in handcuffs. The man still does not comply and the video shows what appears to be the man reaching with his free hand to grab the officer’s wrist, then lifting the officer’s arm toward his open mouth.

Because the person taking the video that is circulating on social media was moving from a position with a partially obstructed view to somewhere that had better visibility of the episode, this moment is part of a five-second span of the ordeal that was not captured on the muted cellphone video.

The body camera footage becomes chaotic as both men move rapidly, but the officer is heard saying “Quit biting me,” before he’s seen throwing a punch at the man seated on the moped. Both men fall on the ground, along with the moped, and a struggle ensues.

Boyter had been awaiting backup, and his conversation with the man before any struggle began was to stall for other officers to arrive, Link said. Other officers enter the video soon after Boyter and the man fall to the ground, and they quickly get him lying face down and detain him.

At this point, the man appears to follow commands, and continually asks “Why did you beat me up?” Boyter replies multiple times that he hit the man because of the attempted bite. Boyter wasn’t bitten, although he told fellow officers it seemed the man was close to biting him.

The man was taken to the hospital to be checked on and was not injured during the arrest. While searching him, officers found two bags of marijuana and in a storage container on the moped, they found two bottles of codeine syrup. 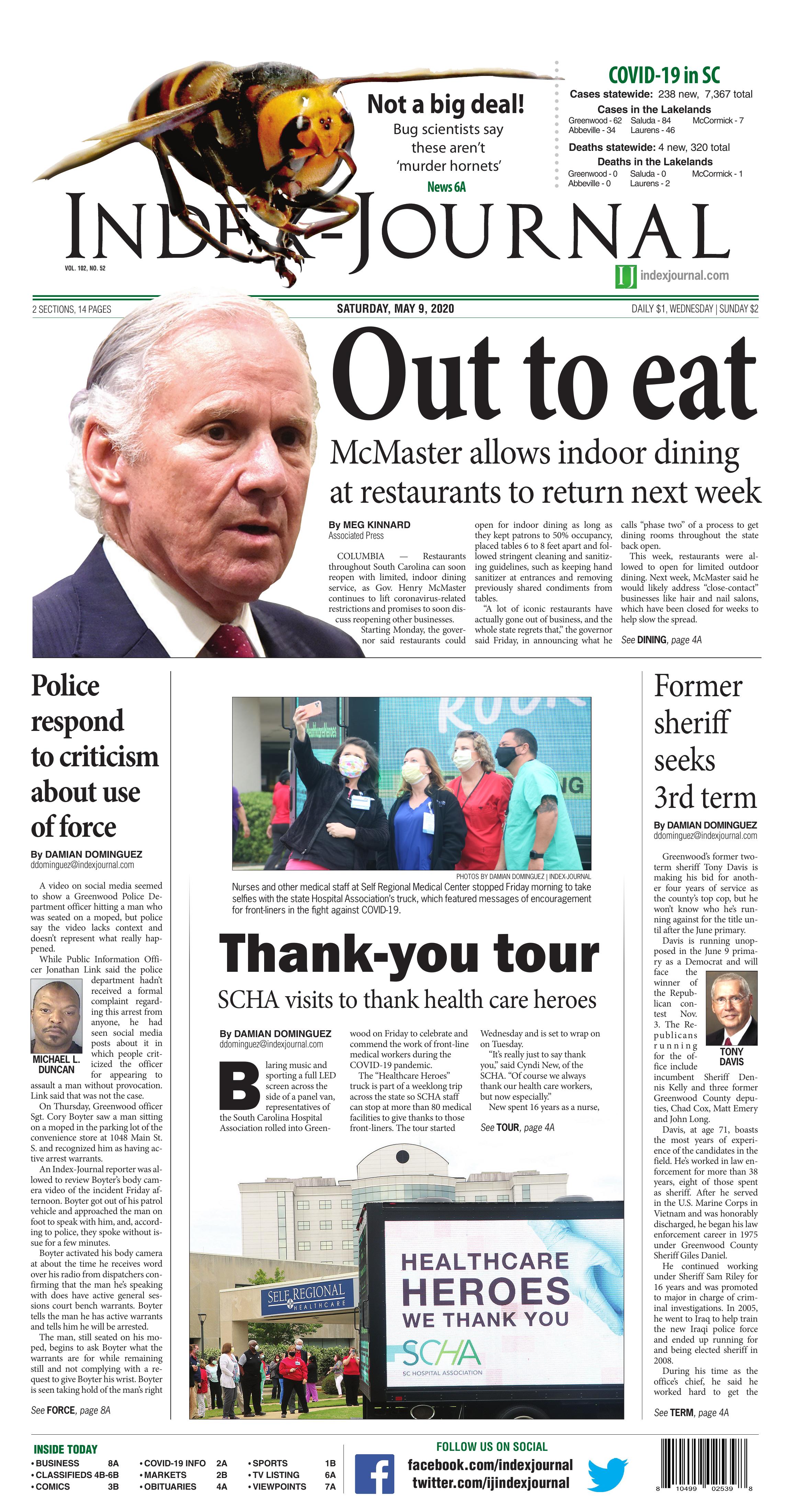